Gun wipes and pinafores? Yes, and petticoats and a single scarf. These were all part of Grandma’s summer, in 1918, along with the harvest and annual Chautauqua. Grandpa wanted this kind of news, but wasn’t getting mail or newspapers as often as he had at Camp Funston. In the letter he wrote on July 14, from France, he told Grandma he had just received her letter from nearly a month earlier on June 17.

Grandma had enclosed a photograph, which he proudly showed off to his buddies. I don’t know which picture she mailed. Nothing she sent survived the trenches. Here’s one from an old family album, probably taken in the years before the war. I remember my grandmother’s full cheeks, made even rounder when she broke into her sweet smile. 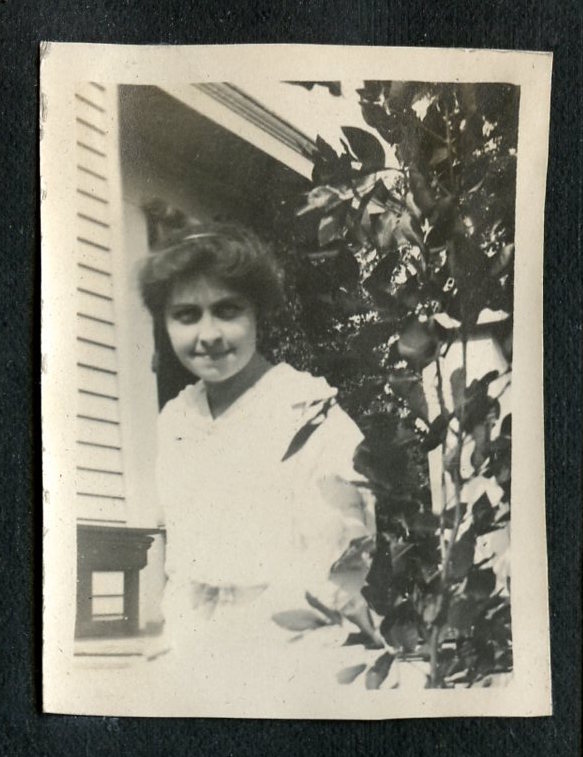 Grandma in undated photo found in an old family album.

Grandpa’s July letters seem nostalgic to me. He wrote about “Dear Old Missouri” and wondered about what was going on back home.

July 8. “I guess the threshing machines are harvesting around home by now.”

Harvesting brought their small farming community together. Neighbors pitched in to help in the fields. Children and women brought water and meals. Itinerant workers came in to complete the jobs before rain set in, ruining ripened grain. Here’s a rare picture of Grandpa helping with the harvest of blue grass on the Bilby Ranch near Skidmore, Missouri. The bags held the seed stripped from the chaff.

Grandma remembered the threshing machines used to harvest grain. She described the process in an interview my father taped in the 1970s.

Al Vaughn had a big steam engine to operate the threshing machine. It was so heavy that when he crossed a bridge, they had to put planks down first. The kids watched for that and were on hand to get a turn of climbing up on the engine and blowing the whistle a couple of times. Neighbor helped neighbor, so they might be working for several days. Some came with hayrack to haul the bundles from the field to the machine, there were others who pitched the bundles on the racks. Some had wagons to haul the grain to the bins. Women went from place to place helping each other in preparing meals. To feed a big crew, was no small job—and I might add, they were always well fed.

That summer in France, in 1918, when Grandpa couldn’t farm, he took note of how the French farmers brought in their crops.

July 8. The largest implement I have seen is a mowing machine. They haul hay and wood all the time, and milk the cows three times a day and one of the handiest things is that they can open a door from the kitchen and be in the cow barn and all built under the same roof and there is no farm house at all. The people all live in the towns and villages two or three miles apart and go out in the country to farm. I haven’t saw but one farm house since I have been here.

July 31. The people here are harvesting their wheat now. They use cradles and tie it by hand.

As Grandpa thought about home, and what he would be doing this time of year, he mentioned how he would miss being with Grandma at the Chautauqua.

July 23. I suppose by the time this reaches you, you will be attending the Chautauqua. I wish I was there to be with you.

In 1918, the big event was held from August 25-September 1. Famous speakers were brought in, along with popular musical performers. Events were offered all day, and many businesses closed for the duration of the event.

Dressed in their best, some arriving by automobile, people crowd into a tent to attend a lecture or musical performance. Printed in the August 11, 1916 issue of the King City Chronicle.

Again from her 1970s interview, Grandma described the event.

The King City Chautauqua was one of the nicest things we had. When it first started, it ran for ten days. As time went on it was cut to eight and finally to six days, before it folded.

We tented on the grounds several years, and that was so much fun. One year there were forty tents on the ground.

A Chautauqua tent? Grandma sits by the post, her grandfather A.S. Martin to her side. Her younger sister Mary stands, one hand on her father’s shoulder. In front of her is their brother Charley. Grandfather Martin died in March 1918, dating this photo to 1917 or earlier.

For a small place we really had some good talent. We were in a circuit and the talent moved from place to place. One night William Jennings Bryan was to speak. Because of a heavy rain, and dirt roads, he did not get there until late at night. By the time his lecture was over, it was nearly midnight. Very few, if any, left before the lecture. We always had several musical groups. One that was always there was Maupin’s Band from St. Joseph. The very popular piece for Maupin’s was The Stars and Stripes Forever. If they did not play it, then there was a request for it.

Plans were made weeks ahead, and one of the things was, that we have a different dress to wear each day. Those were the good old days.

The war made an appearance at the 1918 Chautauqua. A wounded soldier gave a talk. And this movie was shown.

Advertisement in the August 16, 1918 issue of the King City Chronicle. No additional information was provided on that “rich lady in the east.”

Grandpa could picture the Chautauqua and the harvest. But he had to imagine Grandma doing something new this year–working for the Red Cross.

July 23. You spoke of the Red Cross work you were doing. Keep it up, it sure will be needed here this winter as they say it is an awful cold country and it must be when we sleep cold in July, so tell every one that they will do a great lot by helping with the war by knitting and try to get in early.

In fact, Grandma, her sister Mary, and their mother were making a range of items  requested by their local Red Cross chapter. And they did this work during the busy harvest season, as noted below. Those “refugee dresses?” They were made for Europeans displaced by the war, many in France and Belgium.

I don’t understand why the Red Cross sent out garments “to make them up,” unless they were gathering old garments to repurpose. In any case, one thing is clear to me. My grandmother, her sister and mother must have understood the full horror of war. In making gun wipes and pinafores, they recognized the needs of both the soldiers and the defenseless victims of their violence. The war may have been thousands of miles away, but it wasn’t far from their minds or their busy hands that summer on the farm. 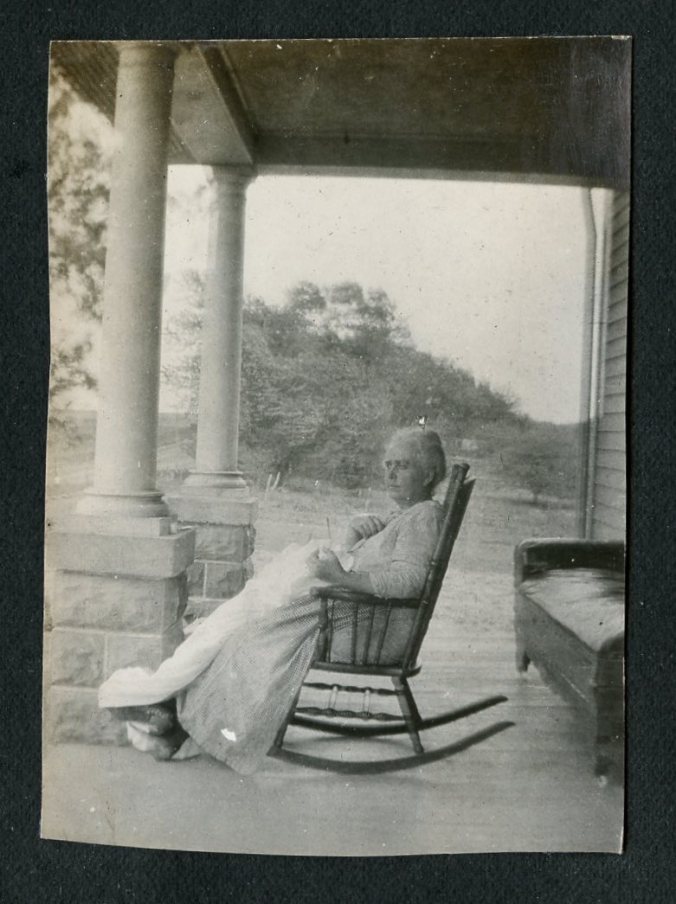 My great-grandmother, Mrs. S.J. Dykes, front porch of the King City farm around 1915.