One hundred years ago today, on June 16, 1918, Grandpa disembarked the Caronia, one of nine ships in a convoy that carried American troops across the Atlantic.

Where had they landed? On the other side of the card, the postmark provides a clue.

“Old Swan LV” was a neighborhood in Liverpool, one of the busiest ports accepting American soldiers during the war. In the History of the 89th Division, the author confirms Liverpool as the port, p. 40. He also names the army’s rest camp as Knotty Ash.

Both the Red Cross and the American Y.M.C.A. had facilities at the camp. They organized music and sporting events, along with places to write letters home. The arrival postcard includes the Red Cross logo, as well as “Soldiers’ Mail” and “No Postage Necessary,” denoting official army correspondence.

The nature and content of Grandpa’s letters changed when he arrived “overseas.” He couldn’t identify where he was or provide any details that might reveal place or military activities. He was “some place in England,” or “somewhere in France.”

He wrote two letters on June 16, the same day he addressed the postcard. The first one described the trip over, and how he’d been sick “a couple or three days after leaving the States.” He ended with an explanation of why he couldn’t say more, . . .

The second letter offered a bit more information. “We have tents to stay in but they are good ones,” he wrote. And then on a personal, perhaps homesick note, he mused, “I supose every one is busy at home farming. I haven’t saw any thing in the farm line here, only a potato patch. Well, my Dear, I can’t write much so will close.”

Once they arrived in Europe, soldiers couldn’t “write much” and they knew each card, each letter, would be read and approved by censors (who could cut out portions or refuse to send the mail). Every envelope I have included some kind of official stamp and a handwritten signature of the censor. 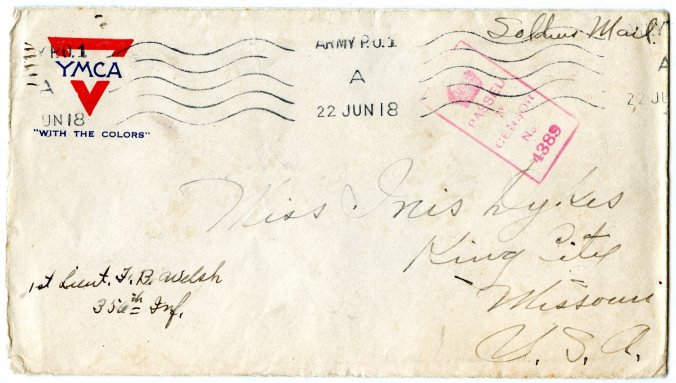 Grandpa wrote “Soldiers Mail” in the top right corner of envelope that held his June 16 letter.

The postcard and first two letters from England open a new chapter in the correspondence I’m sharing here. The number of letters Grandpa wrote—and received—decreased. At times, he worried that his mail from home has been lost. I have no way of knowing if Grandma wrote less often, or if her letters did get lost in the mail. I only know that he eagerly awaited them. “Keep on writing I will get them some day,” he wrote that first day he landed on foreign soil. 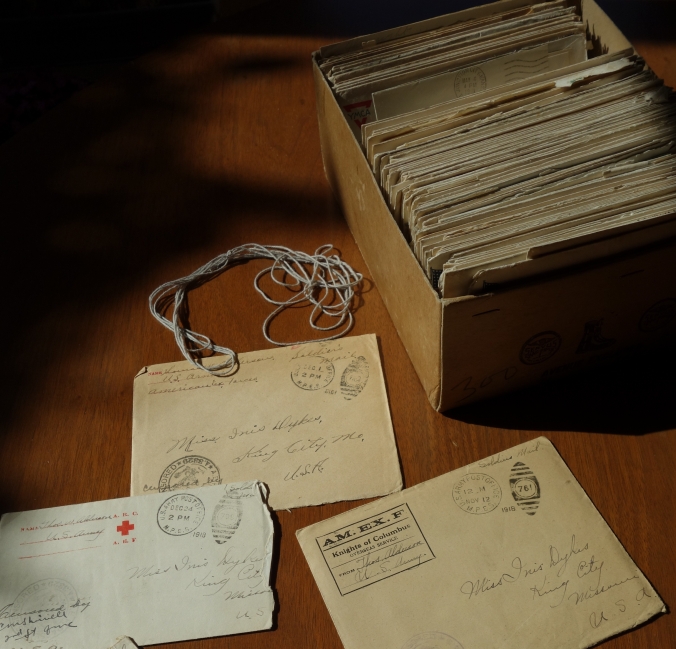 A group of letters carrying the marks and names of official censors. Photo (c) Charlene Reichert.